Drew and Jonathan Scott want to come to your town, but it’s not your house they’re eyeing for a makeover — it’s your elementary school library.

To celebrate the release of their first children’s book, Builder Brothers: Big Plans, out now, the Property Brothers stars, 40, are hitting the road on a 12-city book tour and launching a national contest where one school in need can win a total library overhaul.

“Parents, teachers kids, anybody can submit,” Drew tells PEOPLE. “They’ll be sending photos and a little story about their space, and then we’ll be picking one to win that prize and we’re gonna come and make it over.”

Through partnerships with Kohl’s, Heart of America, and their publisher, HarperCollins, they’ll outfit the winning space with cozy reading areas, a vibrant new look and tons of fresh page-turners. But, Drew notes, “A library isn’t just about having rows and rows of books. It’s about having a space that inspires creativity.”

The Scotts proved that to be true with another heart-warming makeover to mark Builder Brothers’ debut. On Tuesday, they unveiled a new look for the Boys and Girls Club of Harlem Learning Lab in New York City. 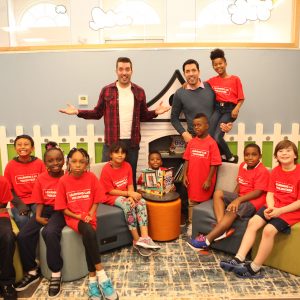 “We got the kids to give us their designs,” says Jonathan of the project, which was brought to life with help from Lowe’s and Heart of America. “You don’t know how much it means to kids to be a part of it. Even if we have homeowners who have kids on Property Brothers, we get them to be a part of the design process. So the kids drew their dream Learning Lab.”

“It was hilarious because it had unicorns, a Kit Kat couch and all these cool outside the box ideas,” says Drew.

“We couldn’t find living unicorns anywhere, so we had unicorn pillows,” Jonathan clarifies.

They hosted the first-ever reading of the book on site, and Drew says, “The kids absolutely loved it.”

And yes, they both note, little kids are HGTV fans too. “Why do five year olds watch real estate and design television? I don’t know. But we have a big kid audience,” says Drew. Adds Jonathan, “They’ll run up on the street and they’re like ‘Mom, dad, it’s Drew and Jonathan, the Property Brothers!‘ The parents are like, ‘Who? What?’”

Their elementary school audience is only set to grow as they set off for what they promise will not be a “normal” book tour. “We always want to do something a little bit different,” says Drew.

Check the tour schedule to find a stop near you, and enter your library for a chance to win a Scott brothers makeover at drewandjonathan.com/builderbrothers.