Russell Wilson is a Super Bowl champion and three-time Pro Bowler. He has countless endorsement deals. His jerseys are worn in nearly every part of the world. And – he’s married to the pop star, Ciara.

His accolades and celebrity status may draw the spotlight, but it’s his philanthropic work that makes the Seattle Seahawks quarterback and devout Christian a hero to so many people.

Why Not You Foundation

Wilson performs a majority of his charity work through his foundation, Why Not You, which he started in 2014.

In a video on the organization’s website, Wilson states that his father instilled in him a “why not you” attitude when he was 14. Now, the star athlete is passing that message onto others while raising money for important causes.

“Our mission at Why Not You Foundation is to empower and inspire change in others one individual at a time and one kid at a time, and in turn, they pass it on creating a snowball effect,” Wilson told People Magazine in August.

Wilson routinely makes trips to the Seattle Children’s Hospital where he recently donated more than $1 million to its Strong Against Cancer program.

“I’m really grateful to have the opportunity to be able to help and spread the love to these amazing kids. With this donation, I’m praying and believing that a young kid’s life will be saved just like young Milton Wright’s life and many others’ lives so far,” Wilson told People.

That was just part of his busy charitable offseason in 2016, as a Why Not You event in July raised more than $400,000 thanks to Wilson who posed for a poster designed by famed Seattle artists Tock and John Costacos.

In 2010, Wilson’s father, Harrison Wilson, passed away due to complications of diabetes. Wilson initially started his foundation with the goal to fight the disease before expanding benefit other causes such as cancer and domestic violence.

“I was initially going to call it the Russell Wilson Foundation, but I didn’t want to make it about me or about him… We’re not focused on one thing, it’s a bigger cause. I just want to make sure I’m doing my part,” Wilson said at his event in July.

The fight against Diabetes and his father are never too far from his heart (he wears a rope band on his wrist in memory of his dad). In 2012, proceeds from Russell Wilson Passing Academy, went to the Charles Ray III Diabetes Association (CR3) and organization for which Wilson is an ambassador.

The RWPA is a fundamental camp for kids age 8-17 that Wilson runs every offseason. All are welcome to compete even those less fortunate as the RWPA helps inner-city and underprivileged youth through sponsorships to get involved.

In 2014, Wilson and Why Not You teamed with NASCAR driver and Washington native Kasey Kahne and his Kasey Kahne Foundation for a charity concert, auction, and golf event called The DRIVE. 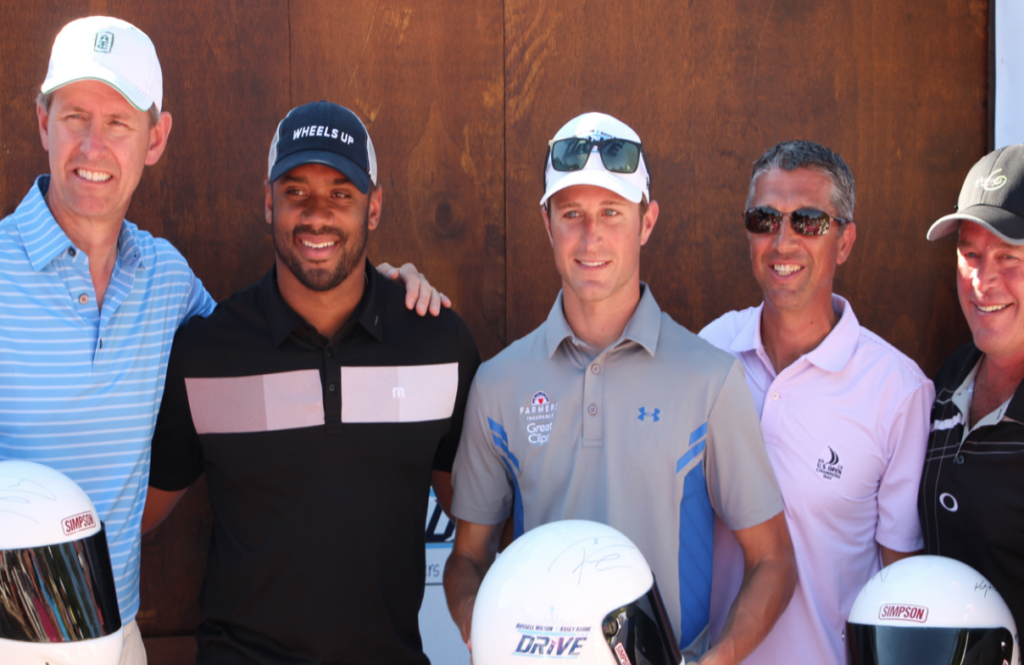 In the three years since the annual event began, The DRIVE has donated more than $1.7 million to Seattle area charities including the Boys & Girls Club of King County and the previously-mentioned Strong Against Cancer program, which benefited from the event in 2016.

“The DRIVE is a great event that brings the community together for a fun evening to raise money for an important cause, I love being a part of it,” said Wilson.

“It is a great event that everyone has a lot of fun at. It’s also a good way for me to stay connected to the community and partner with Russell on such a special event and help the incredible team at Seattle Children’s Hospital cure childhood cancers,” said Kahne.

Another way in which Wilson is raising money for his Why Not You Foundation is through his men’s clothing line, Good Man Brand.

Launched in May 2016, Good Man Brand goes by the tagline “Lead. Inspire. Live.” For each item sold from his lifestyle label (which includes blazers, polos, pants, sweatshirts, t-shirts, and sneakers), $3 is donated to Why Not You, specifically benefiting inner-city youth.

“We’re trying to change the way and the attitude of a culture,” Wilson told The Huffington Post. “Ultimately, this brand is going to help change people’s lives.”

There’s no telling when a football career will end but Wilson is making the most of his time in the limelight, and his impact through his charitable work will last a lifetime.