A random act of kindness is heaping big rewards for a Kansas City man.

Dave Cochran — a homeless Kansas City Chiefs fan — helped strangers along U.S. Highway 40 pull their cars out of the snow in the Missouri city on Saturday after several inches fell in the area, reported local CBS affiliate KCTV.

What Cochran didn’t know was that one of the trapped travelers he aided that day was actually Chiefs player, Jeff Allen, who got stuck in the snow on his way to the Chiefs game against the Indianapolis Colts in his 2019 BMW.

“I rolled down my window and I asked them if they needed help,” Cochran told the outlet. “They said, ‘Yeah! We’re trying to get to the game.’”

Without any hesitation, Cochran — who lives out of his truck — towed Allen’s car out of the snow and up a hill, with the athlete successfully making it to the game, according to KCTV.

Cochran’s act of kindness did not go unnoticed. 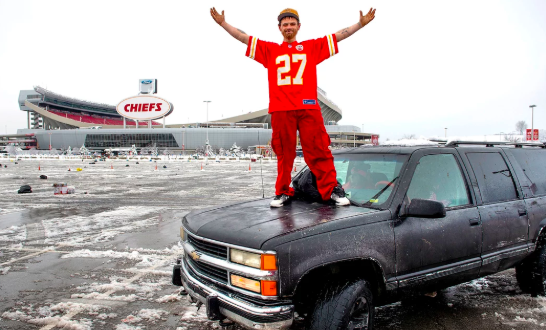 Allen used Twitter after the game to ask people to help him track Cochran down, so that he could thank him and give him AFC Championship Game tickets.

“My car got stuck in the snow before the game & a nice guy named Dave help pull me out without knowing I was a player. I want to give him tickets to the AFC championship game for helping but don’t have a way to contact him. He drove a 97 or 98 Black Suburban,” tweeted Allen.

Update: Despite the recent influx in people changing their name to Dave in the KC area lol, I was actually able to track down the Dave that helped me thanks to the power of social media and #ChiefsKindgom. Thanks for your kindness https://t.co/e4OkEg6AAw

“I seen that message and people called me,” Cochran told KCTV. “I started bawling out of happiness and excitement.”

Cochran made a Twitter account so that he could respond to Allen, tweeting out a video saying that it was him who helped the NFL player.

Cochran has a complicated past, filled with legal run-ins and personal trauma, according to the Kansas City Star.

“I was in prison from 2008 to 2015 with a six month break in between,” Cochran told the outlet. “People gave me chances. People didn’t give up on me.”

And now, even more people are rooting for Cochran to succeed and turn his life around.

Justin Manford, a stranger to Cochran, started a GoFundMe account to raise money in hopes that it’ll “give Dave the leg-up to get on the path that he wants.” The fund has already raised over $14,000 — well over the $10,000 goal.

According to KSHB in Kansas City, businesses are also reaching out to help Cochran in any way that they can — one replaced the broken windows in his car, and another gave Cochran and his fiancé some clothes for the cold weather.

“We’ve got a lot of caring, good-hearted people in Kansas City,” Cochran told the Kansas City Star. “I want to use this to build myself up. I want to give back.”