File this under reasons why we love Taylor Swift.

Over the weekend, the 28-year-old Grammy winner met Jacob Hill, an 8-year-old boy with autism who she helped get a service dog. Swift, who donated $10,000 towards Jacob’s service dog Reid, gave him and his family members front row seats at her Houston concert on Saturday, and backstage passes!

“Taylor Swift donated $10,000 towards my son’s service dog. She gave us front row seats and backstage passes to her concert this past weekend,” Jacob’s mom Allison Hill wrote on the Autism Speaks Facebook page. “Taylor Swift was so kind. She said Reid was a big puffball and so cute. She was especially awesome with Jacob.” 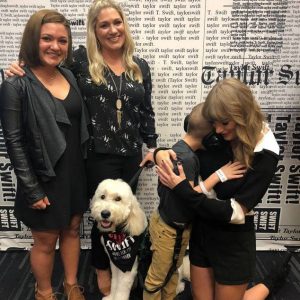 “She didn’t see my son’s disability she just saw him,” Allison’s post continued. “She got down on her knees and looked him right in the eyes and said hello and that she was thankful HE came to her show even though she knew it was loud and there was so much going on. He grabbed her face and pulled her hair back and said ‘Hi Taylor!’ which was something we were working on all week, but didn’t know if he would be able to say it.”

Allison went on to write that Taylor was “very gracious and acted like him grabbing her face didn’t even phase her.”

“After the picture was taken, the flash scared him so he snuggled right up to her and her sweet smile says it all,” Allison recalled. “My daughter, Jordan, was pumped to meet her. We feel so blessed! Taylor is such an amazing person for doing this for us…again! Jacob made it through almost the entire concert. Taylor is such an autism advocate, we love her!”

Allison also detailed her family’s meeting with Taylor in a Jacob’s Journey blog post, writing, “We were so excited to get to thank her for Reid in person. Reid has changed Jacob’s life and our family life so so much. I don’t think that she will ever truly know how much Reid has impacted Jacob.”

The “Love Story” singer is currently wrapping up the remaining dates of her Reputation Stadium Tour. This weekend she’ll perform two shows in Texas before heading to Los Angeles to open the 2018 American Music Awards on Oct. 9.