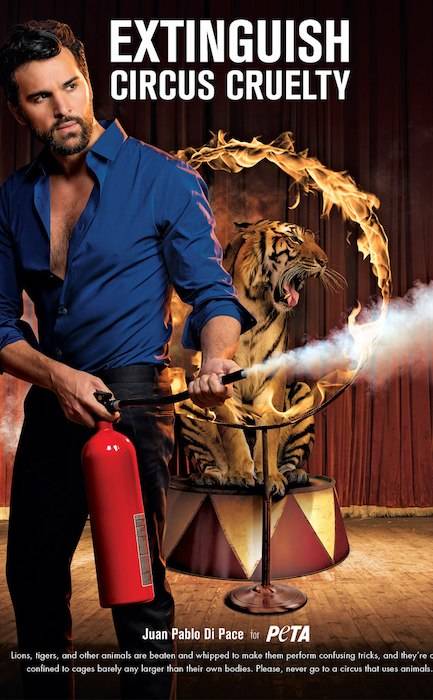 Juan Pablo Di Pace is taking a stand with PETA.

The Fuller House star is teaming up with the organization as he launches bit to extinguish circus cruelty.

“My love for animals really comes from being a kid and discovering stray cats and dogs … and bringing them in,” begins Di Pace during the promotional video.

“I have a special love for felines. I love small cats, big cats. … To see what things are done to them in the circus is really upsetting … they sleep in tiny cages. They’re forced to do things they don’t want to do. They beat them up,” he says.

“[W]hat we see in the circus is just a fraction of what these poor animals have to go through.”

The actor goes on to explain how uneasy and “unnerved” he is by seeing animals perform tricks and that he would never take his children to toa circus that featured animals because it would be too upsetting for him. He says he’d much rather them go to a circus that features only talented human performers.

“I wouldn’t want them to think it’s OK,” he says. “Because it’s not. … [Y]ou can really go to the circus watching amazing performances by clowns or acrobats or dancers. … [L]et’s stop [going to animal circuses].”

0 0
Previous ArticleMillie Bobby Brown Is Going to Be a Big-Screen Detective Next
Next ArticleLogic, Khalid, and Alessia Cara Will Give Suicide Survivors a Voice at the Grammys
Latest Posts