An Ohio father went to great lengths to spend Christmas with his daughter.

Pierce Vaughan, a flight attendant for Delta Airlines, had to work several flights throughout Christmas Eve and Day, so her father Hal Vaughan bought multiple plane tickets to spend the holiday with her in the sky.

Pierce’s story went viral after a passenger, who was seated next to Hal on one of the flights, shared the encounter on Facebook Monday.

“I had the pleasure of sitting next to Hal on my flight back home. His daughter Pierce was our flight attendant who had to work over Christmas,” Mike Levy wrote on Facebook alongside of a photo of himself with Hal as well as a photo of Pierce in her flight attendant uniform.

“Hal decided he would spend the holiday with her. So, he is flying on each of her flights today and tomorrow around the country to spend time with his daughter for Christmas. What a fantastic father! Wish you both a very Merry Christmas!” Levy added. 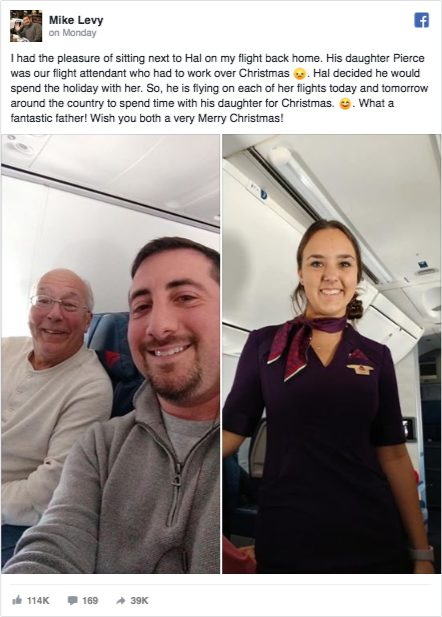 Levy also opened up about meeting Hal and Pierce, explaining to USA Today that Hal purchased a total of six flights.

Levy met Hal on a flight from Fort Myers to Detroit. He also told the outlet that Hal had a challenging time catching each flight, but had a great time overall.

Pierce later shared the photos taken by Levy on Facebook and thanked the airline for being so accommodating to her father.

“Look ma we made it Kimberly Hal Vaughan,” Pierce wrote in reference to her mother. “Dad’s first trip using his benefits was a success! A special thanks to all the patient, wonderful gate agents around the country and my perfect crew.”

“He made it on every flight and even got first class RSW-DTW (Christmas miracle),” Pierce continued.

“Shoutout to Mike Levy for being a great first class passenger & helping us to understand how cool this actually is!” Pierce concluded.

Delta Airlines released a statement, obtained by NBC Chicago, saying, “We appreciate all of our employees for working during the holidays to serve Delta customers, and love seeing this awesome Dad having the chance to spend Christmas with his daughter— even while crisscrossing the country at 30,000 feet.”