Nicole Kidman Donates $500,000 to Support Human Rights in Honor of Her Late Father

Nicole Kidman honored the memory of her father on Monday with a generous donation to charity.

On Dec. 10, Human Rights Day and her late father’s birthday, the actress pledged $500,000 to the United Nations Trust Fund to End Violence Against Women while speaking at a UN luncheon.

“I’ve met survivors who’ve experienced the most unspeakable violence,” Kidman, a UN Women’s Goodwill Ambassador, said in her speech, “yet through the UN Trust Fund, I’ve seen them overcome their pain and regain their courage to look towards the future.” 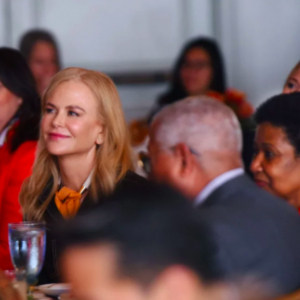 “I’m here today to continue this work and amplify the voices of women survivors through the media and help raise significant funds for programs that address this issue,” she continued.

The actress also posted on Instagram to honor her late father, writing, “Today would have been my Papa’s 80th Birthday. Miss you Papa, love you so much.❤️”

“My papa was such an advocate for human rights,” she continued in an Instagram Story.

Today would have been my Papa’s 80th Birthday. Miss you Papa, love you so much.❤️

Donate to the UN Trust Fund to End Violence Against Women here.

Kidman can be seen currently in Boy Erased. She was recently nominated for a Golden Globe for her performance in Destroyer, which opens Dec. 25.