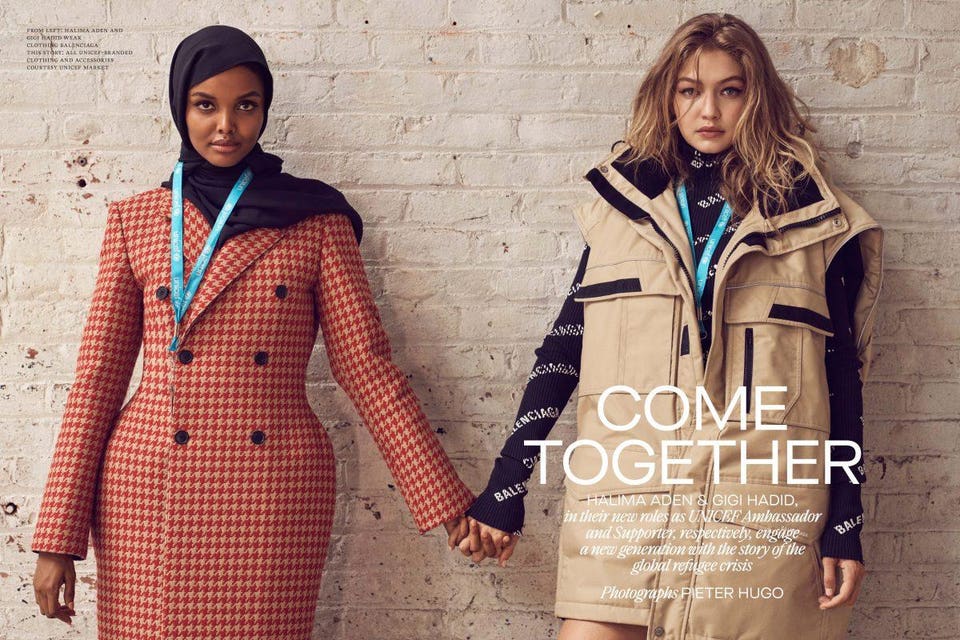 “I am so proud to celebrate the lifesaving mission of UNICEF, especially in such a challenging year for children and refugees globally,” said Roitfeld. “With Halima Aden recently joining UNICEF USA as an Ambassador and Gigi Hadid as a Supporter, I wanted to celebrate these two passionate young women, honoring their accomplishments and the promise of what they will bring to this respected organization.”

Both Hadid and Aden are ambassadors to the organization and have personal connections to UNICEF’s initiatives. Hadid is the daughter of a refugee and Aden a Somali refugee herself who has championed the industry as a Muslim fashion model.

“I was six and can still remember that UNICEF sign and every single missionary who came to the camp. I forget names, but can never forget how they made me feel,” said Aden for the issue. 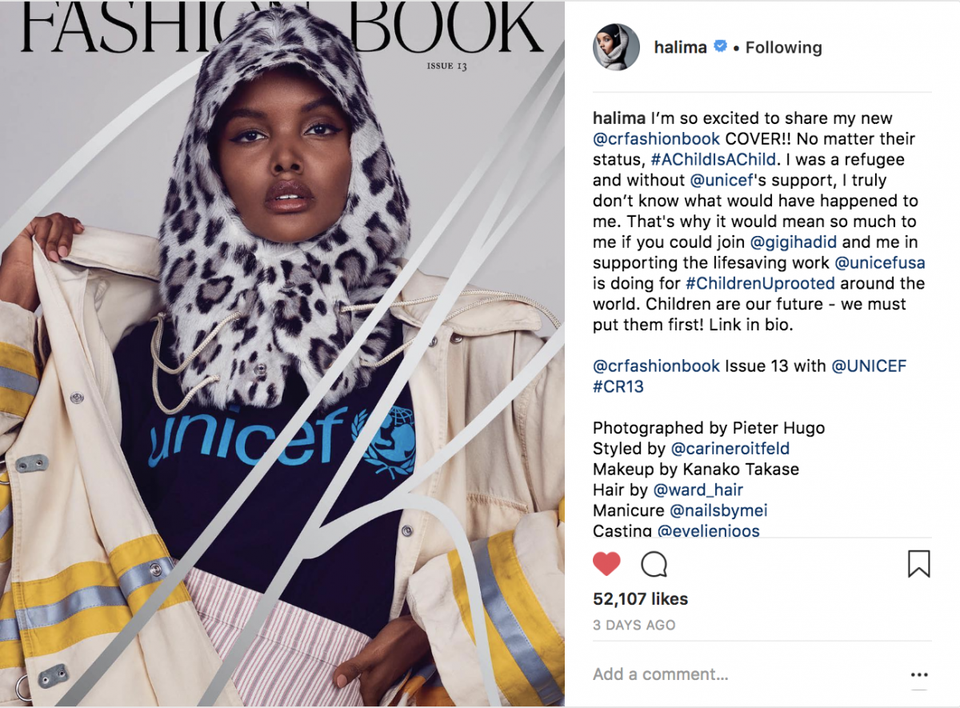 Aden was born in a refugee camp in Kenya and moved to the United States at age six. In 2016, she competed in the Miss Minnesota USA pageant as the first contestant to wear a burkini and a hijab. Today, she’s signed to IMG Models and has appeared on the cover of Allure and Vogue Arabia as the first hijab-wearing cover star.

“It takes a village to raise a child. My mom was still illiterate and going through her own traumas, just escaping a war, coming to a new country, and now raising kids. My teachers were like second parents. They stayed after school with me and helped me with homework. They weren’t even paid to do that,” said Aden on adjusting to life in the United States after the refugee camp.

Today, there are more than 50 million children on the move around the world, 30 million of whom have been displaced by conflict and violence, and millions more migrating in the hope of finding a better, safer life. UNICEF has been at the global forefront of advocating for child safety. Their programs in countries like Mexico, Guatemala, Honduras, and El Salvador have kept refugee and migrant children safe, ensured rights in their home countries, protection while on the move, and education and health care programs.

“I wish I could tell you it was my or UNICEF’s idea, but it was really Halima and Gigi’s,” said UNICEF USA’s CEO Caryl Stern. “They knew they had the dual covers, so they approached Carine with the idea who brought it to us. What a gift. It was a great public relations opportunity for us, and a great way to promote the organization in a way that is fun and can let people know you can look good, be good, and do good all at once.”

Stern has just returned from a trip to the Rohingya Refugee Camps in Cox’s Bazar, Bangladesh where Hadid joined her for her first mission. The supermodel documented the trip on social media to her 42.7 million followers with powerful images, stories, and Instagram Live from the camp. CR Fashion Book’s September issue also features an interview between Hadid and Hamdia Ahmed, a Somalian Refugee and activist who benefitted from the support of UNICEF during her time in a Refugee Camp in Kenya. 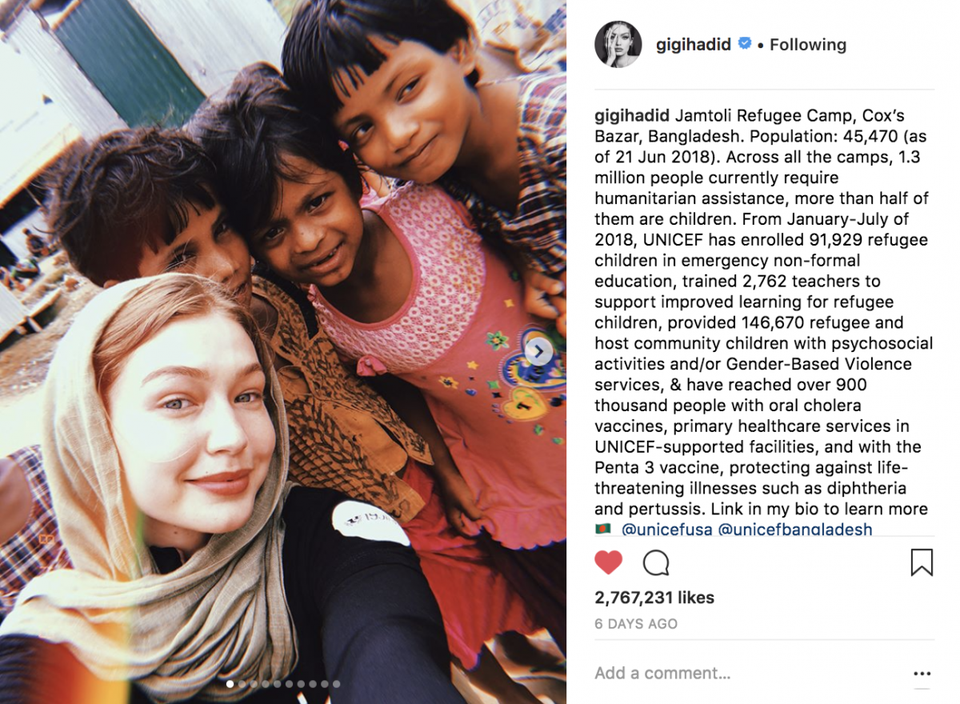 “It was phenomenal to watch the way the young girls, particularly at the camp, related to her and were willing to share with her the story of their migration from Myanmar to Bangladesh,” said Stern on the experience. “We sat with one group of young girls who were talking to us with stoic voices, as if they were talking about what shirt they were going to wear, telling us about their villages being burned, family members killed, or women in the village who were raped. This was life as they knew it. Gigi and I were simultaneously horrified and thankful that these girls were going to be ok. I have years of experience with this, but this was Gigi’s first experience. She has this ability to just put her hand out, be reassuring and listen, and respond in ways that put these women at ease.”

UNICEF USA has vaccinated over 600,000 kids in the Cox Bazar camp, installed child-friendly spaces, and elementary programs, but have much larger goals at stake. Hadid and Aden have created a CrowdRise page to raise money in support of UNICEF’s Children Uprooted initiative, urging their followers to get involved in any way. According to the CrowdRise page, just $7 can buy a fleece blanket for kids in hospitals and day-care centers to $40 that could provide a high-energy paste that could bring a malnourished child back to good health.

“There are more children on the move right now than any other time in history, and we will lose an entire generation if we can’t educate these children and give them an opportunity to have a chance of a successful future, and that will take dollars,” said Stern. “We want our supporters to see these children for what they are – children. They’re not refugee children, Myanmar’s children, and as adults in the world, we need to be supportive and ensure that their voices are heard.”

Visit www.crfashionbook.com today to pre-order CR Fashion Book Issue 13 and be among the first to receive it when it ships in September. The issue will be on stands September 13.