Shortly after a GoFundMe account was started to benefit the family of a Wisconsin firefighter killed by an explosion, someone took a shot and asked Wisconsin-born J.J. Watt for a donation.

Cory Barr, a captain in the Sun Prairie Fire Department in Wisconsin, was killed in an explosion Tuesday night that was caused by a gas leak. Not only was Barr killed, one of the buildings that was destroyed in the explosion was the Barr House restaurant and bar owned by Barr and his wife, according to the Wisconsin State Journal.

A GoFundMe was started to take donations for Barr’s wife and two daughters. And on Twitter, Jenna Blaser asked the NFL’s Walter Payton Man of the Year for help.

@JJWatt please do what you can for Cory Barr's family. He was very well known, liked & appreciated in the Sun Prairie community. He was brave and a true hero! Any & all support from one fellow fire fighter family to another! #RIPCaptCoryBarr #firefamily https://t.co/oEE9aCNPqW

Watt didn’t announce his donation on social media, or call any attention to it. There was just a donation, alongside the $100 and $50 donations from all over, for $10,000 from Justin Watt, J.J.’s given name. 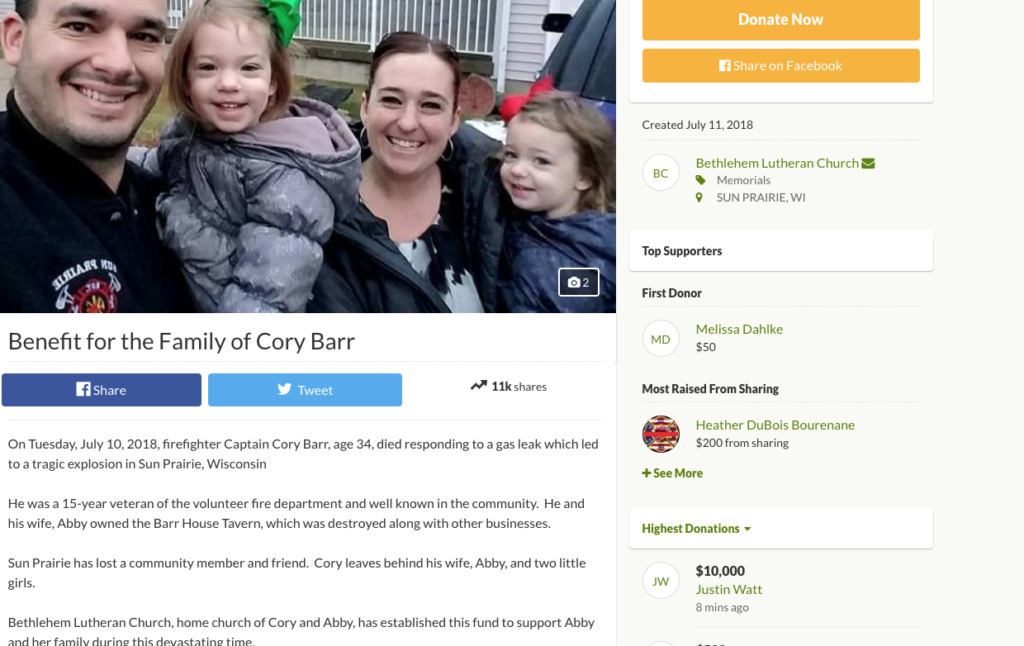 There are two connections to the story for Watt. He was born and raised in Pewaukee, Wis., about an hour from Sun Prairie. Also, Watt’s father was a firefighter for 28 years.

Watt’s charity work is a part of his celebrity. He raised more than $37 million for people in Houston affected by Hurricane Harvey. In 2016, similar to Wednesday’s donation, he gave $10,000 to a GoFundMe account for a Texas high school player who needed emergency brain surgery following an injury suffered in a game.

During a horrendous time for the Sun Prairie community, maybe it will provide a bit of comfort that Watt was willing to help out.