Wonder Woman to the rescue!

The star synonymous with the lasso-toting superhero popped up at a children’s hospital to give a group of kids an unforgettable surprise. Gal Gadot headed to Inova Health Children’s Hospital in Virginia on Friday, where she greeted kids and staff in full Wonder Woman garb.

Naturally, Gadot in costume did not go unnoticed in the hospital halls.

“Thank you ⁦@GalGadot⁩ for visiting us ⁦@InovaHealth⁩ Children’s Hospital. You are a true Wonder Woman. The kids loved it…and so did the staff #wonderwoman84,” Dr. Lucas Collazo, a doctor at the hospital specializing in congenital heart disease, tweeted while sharing a group photo.

Thank you ⁦@GalGadot⁩ for visiting us ⁦@InovaHealth⁩ Children’s Hospital. You are a true Wonder Woman. The kids loved it…and so did the staff 😉 #wonderwoman84 pic.twitter.com/EFDLM02rpf

Some days are just WONDERFUL!!! So grateful for the stunningly gorgeous and kind Gal Gadot for bringing her superpowers to the kids at work!!! #wonderwoman #ilovemyjob

The visit was a welcome surprise for everyone, including those who sadly had to miss the sighting. “Dear @GalGadot- Thank you SO MUCH for visiting my patients and colleagues at #InovaChildrensHospital!” Pediatric nephrologist Patty Seo-Mayer tweeted. “Next time, can you align your visit with my call schedule? Love, #SuperFan.”

It sounds like Gadot brought much joy to all she met on Friday, including mom Kelly Swink Sahady and her 7-month-old daughter, Karalyne Sahady, who is a patient battling aggressive acute myeloid leukemia. As Kelly explained to E! News, she and her husband have been juggling raising seven children while spending the last five months in the hospital with their daughter as Karalyne undergoes treatment. As such, Gadot’s surprise was especially heartwarming. 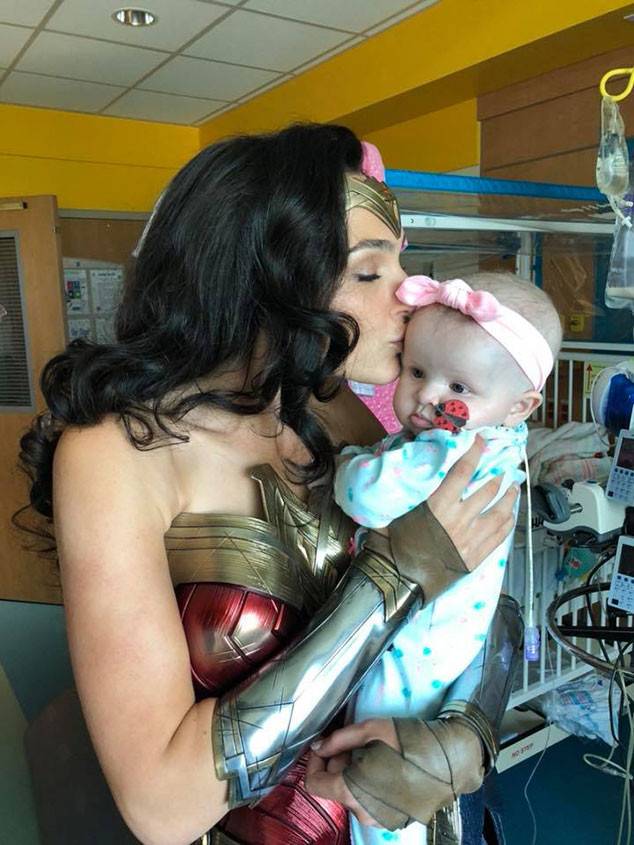 “Our family has been greatly affected by Karalyne’s diagnosis. Living in the hospital for such long three to four week stretches at a time is hard on us all. On Friday, I was with Karalyne at the hospital alone while my husband was working. I was in our room with one of our many doctors while Karalyne was hooked up to IV antibiotics, when in walked Wonder Woman, Gal Gadot, in full costume,” she recalled to E! News.

“She had a huge smile on her face and walked right over to me. She asked if she could hold Karalyne and scooped her right into her arms. I was pretty starstruck, as this was a huge surprise,” Sahady described. “The hospital didn’t tell us she was coming. We talked for a bit, and she asked me about Karalyne and how she was doing. She asked about her diagnosis. I could tell her crew was in a hurry to keep moving, but she was not. She asked about our other kids and even brought in some toys for them.” 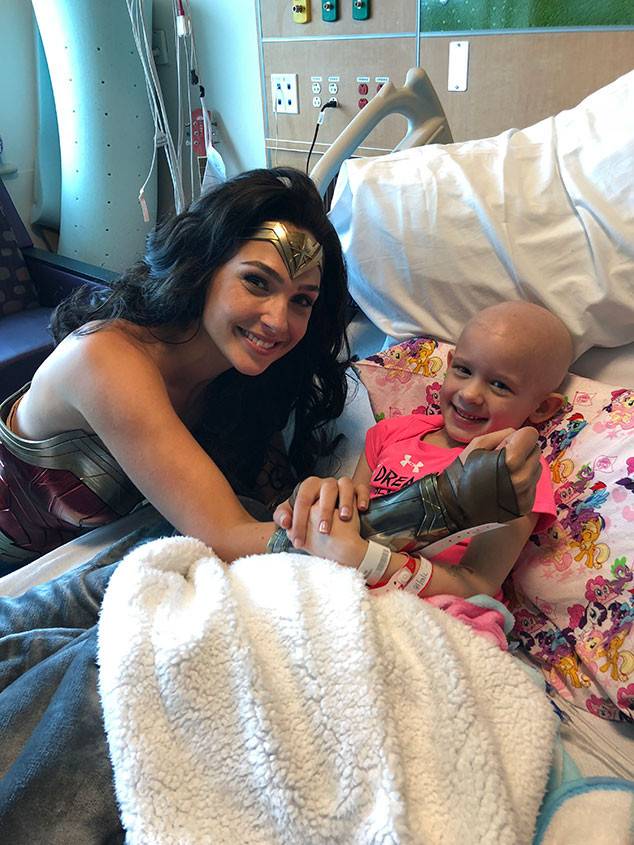 As Sahady noted, “What meant the most was that she didn’t want any cameras from anyone but the families of the patients. She didn’t want any press coverage for spending her afternoon at the hospital. She did this out of the goodness of her heart, and that meant more than anything. We are Wonder Woman fans for life now.”

Gadot had been in Washington, D.C. shooting the upcoming Wonder Woman sequel and took some time while in the area to pay a visit to the nearby hospital. According to the hospital’s rep, Gadot spent more than an hour at the hospital playing with the kids, chatting with the teens, handing out toys and posing for pictures with the staff and physicians.

“A few of the parents cried tears of joy after seeing their child’s face light up at this magical moment,” the hospital’s rep described. “One patient underwent a morning full of very serious procedures, and you could see her perk up immediately when she saw Gal walk into her room. Gal was such a lovely person and brought such beautiful energy to our halls. She has a gift of making a special connection with every child she meets.”

“Visits like this do more for our patients than we ever could,” the rep added. “For a child to have the real Wonder Woman visit them in the hospital is truly magical—they will go home and remember this amazing experience amidst all of the pokes and procedures. This allows children to heal faster and really just get back to the business of being kids and being joyful.”