It was trip long in the making, powered by dozens of brilliant, compassionate animal lovers, who asked for nothing in return except the chance to change an animal’s life.

Southwest Airlines has a history of helping those in need, especially after natural disasters. So when Washington D.C.-based Lucky Dog Animal Rescue approached the company about flying out homeless pets stranded in Puerto Rico following the devastation of Hurricane Maria, Southwest responded immediately.

“We had a goal to do something for each of the hurricanes. The situation in San Juan was a little different because our employees and their families were affected, and with the electricity being out, we couldn’t focus on the animals right away,” Lisa Tiller, Southwest’s Senior Communications Manager told PEOPLE. 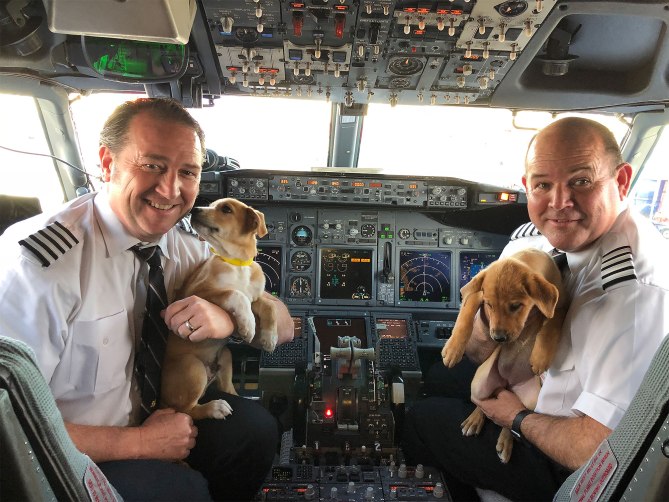 But just because they couldn’t fly pets out, didn’t mean Southwest wasn’t bringing help in. The airline routinely shipped planes loaded with supplies to the island, much of which is still without running water and electricity. Many of the runs included pet essentials to help rescuers in Puerto Rico look after animals.

In January, three months after the hurricane hit, things were finally in a place where Lucky Dog Animal Rescue and Southwest could put their plan into action.

For the mutt-filled mission, Southwest took one of its planes out of service and staffed it with some of its finest employees, all of whom chose to donate their time to this effort.

The plane’s cargo hold and overhead bins were filled with supplies Puerto Rico’s humans and animals needed before taking off from Baltimore-Washington International airport at 5 a.m. on Saturday.

After three hours and 45 minutes in the air, the volunteers landed in San Juan and began unloading the 14,400 lbs. of much-needed supplies they brought with them.

Next it was time to handle the precious cargo. Sixteen cats and 46 dogs looking for forever homes were carefully loaded into carriers off the tarmac and prepared for their flight to a new life.

“Everyone was jubilant. I was shocked! For as long of a day as it was, and as early as it started, people were just in the best moods the whole time,” Horowitz said.

The furry passengers were a mix of pets from different circumstances. Some were living in foster homes before the storm hit, others were abandoned by their previous owners once Hurricane Maria touched down. But it was the rescuers of PR Animals who were caring for these pets before Lucky Dog Animal Rescue and Southwest arrived. And it was these rescuers who were there on the ground to greet the volunteers and say their goodbyes.

“It was very emotional; the rescuers putting their dogs in the crates and saying goodbye to them, because these are animals they have been caring for through very difficult and traumatic times — whether they were caring for them before Maria and weathered the storm with these people, which were a few of the dogs, or whether they were rescued in the immediate aftermath,” Horowitz added.

“It wasn’t about taking the pets off the island, it was about giving hope and physical help to people and reminding them that we haven’t forgotten them,” Horowitz said of the trip’s mission.

Once the pets were packed up, they were loaded on to the plane with their carriers securely strapped into the seats.

You might think a plane packed with 62 pets in the cabin would be a bit of a circus, but there were only a few howls upon landing.

“Amazingly during the flight, the hum and vibration kind of put them all to sleep,” Horowitz said.

With carriers of kittens and puppies aboard, not everyone stayed in their crate during the trip.

Horowitz admitted that the volunteers and flight attendants couldn’t resist getting some quality puppy-holding and kitten-cuddling time in during the trip back.

Back on the mainland, the dogs and cats were loaded into transport vans and driven to Dogma Dog Bakery in Virginia, where a crowd was waiting to welcome the animals, including several new pet parents.

Nine dogs and two cats were adopted right off the transport vans by animal lovers who had falling in love with the pets’ pictures online.

An adoption event the following day found homes for 10 more of the Puerto Rican natives. By the end of the weekend, 21 of the 62 pets were with their forever families. The rest spent some time in foster homes before being moved to local rescues, including Lucky Dog Animal Rescue, where they will surely find their own pet parents soon.

It was a trip that made sense to Southwest, whose logo is a large heart — even if it meant giving up time and money.

“We’ve been always an airline that has lead with heart,” Tiller said of her company. “It’s hard to find a spare aircraft with more than 3,500 flights a day. To be able to get our top leadership to donate time and plane fuel to save animals is touching. It’s when our employees shine the most are, when people donating time. Everyone is almost in tears because they are so touched to be a part of this.

And for Lucky Dog Animal Rescue, this trip was another small but important step to finding loving homes for all the needy animals of the world.

The non-profit plans to continue helping the pets of Puerto Rico and is working to send more animals to the mainland through the pressurized cargo holds of United Airlines planes, because caring for animals is a way to help everyone.

“When we lose sight of how we treat animals, we tend to lose sight of our humanity,” Horowitz said of what the trip meant to her. “We can’t forget the pets.”

This article originally appeared in People.

0 0
Previous ArticleAfter Scoring A Trick Shot, Teen With Down Syndrome is Contacted By Globetrotters
Next ArticleTom Hanks Starring as Mr. Rogers in 'You Are My Friend' Is Just What the World Needs
Latest Posts