Is there a more all-American celebrity right now than Chris Pratt?

Not only is the 38-year-old actor’s rise from chubby and lovable TV sidekick to buff box office star is proof that hard work and a winning attitude pays off, but he’s also a devoted family man to his wife, actress Anna Faris, and their son, Jack.

On top of all that, he routinely does charity work, and his social media accounts are beacons of positivity that showcase his good deeds, his love of fishing (and everything outdoors), and his daily adventures with Anna and Jack.

If you need any more proof, check out his recital of the pledge of allegiance alongside his boy in 2015. Prepare to have your heart melted.

Pratt’s living the American dream and every bit worthy of the fame and attention he’s achieved. Let’s take a look at the many ways in which he exemplifies what it means to be a good celebrity!

In 2009, Pratt wed girlfriend Faris, whom he met two years prior on the set of the comedy Take Me Home Tonight. Three years later the couple welcomed their first child, Jack, who was born nine weeks premature. During the scary ordeal, Pratt turned to prayer for help.

“It restored my faith in God, not that it needed to be restored, but it really redefined it,” Pratt told People in 2014. “The baby was so beautiful to us, and I look back at the photos of him and it must have been jarring for other people to come in and see him, but to us he was so beautiful and perfect.”

As we’ve seen time and time again in Hollywood, marriages between celebrities often fizzle, but the Pratt/Faris union continues to thrive thanks to their grounded lifestyle which includes plenty of nights in together and days exploring outside.

Perhaps the best evidence of his devotion to his family is his willingness to halt his acting career right in the middle of his prime. Despite ties to two movie franchises (Guardians of the Galaxy and Jurassic World), Pratt told Parade magazine in 2016 that he was taking a break.

“I’ve been on the road for 14 months—I did three movies back to back to back—so I’m taking six months off,” he said.

In his downtime, Pratt caught up on one of his favorite pastimes with his little buddy.

Pratt’s never shy about sharing his love of fishing on social media and now that his son is four years old, Chris has a new partner in crime.

“Not sure what made me more proud: when Jack insisted on holding this barracuda himself, or when he tried it raw!” Pratt wrote in an Instagram post on June 29. “4 year olds will try anything!” he added.

Not sure what made me more proud: when Jack insisted on holding this barracuda himself, or when he tried it raw! (Barracuda sashimi is amazing by the way) haha!! 4 year olds will try anything! Get out and fish! No better way to share God’s bounty with your babies and make life long memories than fishing! Get out on the water! #fishing #fishingislife

In another post in January 2016, Pratt revealed that his love of the outdoors began when he was young and it’s something that is embedded in who he is.

“That part of me will never change,” he wrote.

Something else that will never change: his support for men and women in uniform.

Pratt, who played a Navy SEAL in Zero Dark Thirty, is never shy when it comes to his support of both active soldiers and veterans of the military. He and Faris proudly joined the 22 Push-Up Challenge in 2016, a movement which raised awareness for veteran suicide prevention.

Thanks @canadianoutlaw for the #22pushupchallenge Everyday 22 veterans take their own lives. Please know there are people out there thinking about you, praying for you and who appreciate your sacrifice. If you are thinking of harming yourself call 1-800-273-8255.

This past Memorial Day, Pratt and fellow actor John Krasinski participated in the Murph Challenge, a workout that consists of a one-mile run, 100 pull-ups, 200 push-ups, 300 air-squats, and another one-mile run in one intense sequence.

The Murph Challenge benefits the Michael P. Murphy Memorial Scholarship Foundation, named after a Navy SEAL who died in combat.

#memorialday #murphchallenge @johnkrasinski 1 mile 100 pull-ups 200 push-ups 300 air-squats 1 mile Do it for time. Check out the challenge and get your shirt at https://www.forged.com/ Thank you to all fallen heroes and their families. Today we remember and honor you.

Krasinski isn’t the only actor with whom Pratt has teamed for a good deed.

Pratt certainly gets creative when it comes to his charity work. The best example of him thinking outside the box occurred when he and friend Chris Evans placed a bet on Super Bowl XLIX between the Seattle Seahawks and New England Patriots.

Pratt (a loyal Seahawks fan) and Evans (a die-hard Pats fan) agreed to dress up as their respective Marvel characters in a visit to a children’s hospital in each other’s home state should their team lose. 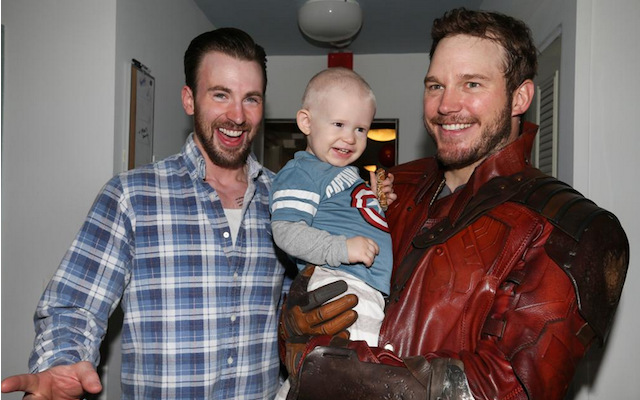 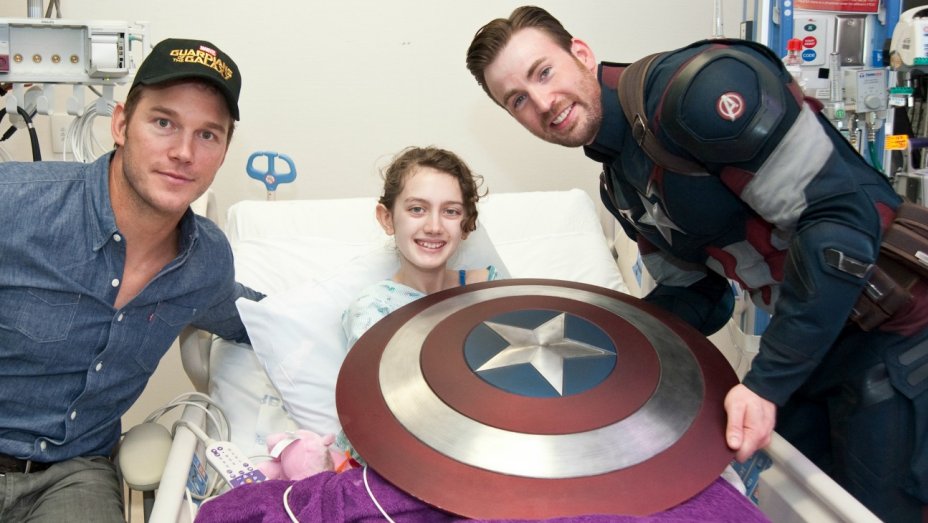 Despite the fact that his team won, Evans proved he was every bit worthy of the Captain America name by returning the favor a month later in a visit to a Seattle hospital dressed as Cap.

Two years later, and Pratt hasn’t slowed down. In May, he and Jurassic World co-star Bryce Dallas Howard took a break from filming the movie’s sequel to swing by Great Ormand Street Children’s Hospital in London.

“I’ll never fail to be moved by the unbreakable spirit of a child. #godisgood Psalm 107:8-9 Let them praise the LORD for his loving kindness, for his wonderful deeds to the children of men! For he satisfies the longing soul,” Pratt wrote in an Instagram post.

“He fills the hungry soul with good. No doubt. Today my longing and hungry soul is filled.”

Bryce and I had the tremendous pleasure of spending some time with our new buddy Elle and a few other patients at Great Ormand Street Children’s Hospital in London. I’ll never fail to be moved by the unbreakable spirit of a child. #godisgood Psalm 107:8-9 Let them praise the LORD for his loving kindness, for his wonderful deeds to the children of men! For he satisfies the longing soul. He fills the hungry soul with good. 🙏🙌👆♥️ No doubt. Today my longing and hungry soul is filled.

Pratt’s account is filled with the smiling faces of the young lives he’s touched.

On top of his hospital visits, Pratt routinely works with organizations like Omaze and Crowdrise, for unique contests that benefit various charities.

Wanna come visit me on the set of the #jurassicworld sequel? In HAWAII!?!? The answer is, “YES!” Of course you do! Click the link in my bio. $10 for a chance to enter and every dollar goes towards an amazing cause!!!!!! Click the link to learn more about the contest and the amazing charity your $10 will benefit! Enter as many times as you want. And I’ll see you in Hawaii!!! By the way I’m going to bug you I’ll until you do this so you might as well just do it now. With love!!! -Chris https://www.crowdrise.com/jurassicworld

So, is Chris Pratt the most all-American celebrity at the moment? Obviously the answer is purely opinion, but he’s got our vote!

Positive stories like this are what make us tick! We’re always looking for partners that feel the same way about good news!

Stay linked to Good Celebrity for all the breaking celebrity news headlines and stories about people doing good! And don’t miss our exclusive interviews, all right here on our YouTube page.