Kelly Ripa enjoyed a steady career as a daytime soap opera actor on All My Children in the 1990’s, but her most famous role is that of herself on Live! with Kelly.

Ripa found a home in the daytime talk show genre, first sitting by co-host Regis Philbin, then Michael Strahan and now alongside daily celebrity guest co-hosts. She’s made the program her own and over the course of 16 years has become a household name and one of the most powerful people in the industry.

A wife and mother of three, Ripa’s down-to-earth personality and relatability have garnered her millions of fans and made her a role model to young women balancing careers and families.

She’s every bit as genuine off-camera as she is on television. Here are the ways in which Ripa continually uses her fame for good.

If there is one thing that’s close to Ripa’s heart, it’s the fight against various forms of cancer. Ripa uses her role as spokesperson for appliance manufacturer Electrolux to support the Ovarian Cancer Research Fund Alliance.

“I didn’t know a lot about ovarian cancer,” she told Access Hollywood in 2008. “I educated myself, and my education came earlier than I would have liked when a friend of mine was diagnosed.”

Ripa’s quest to rid the world of the disease led to her co-hosting the annual charity shopping event, Super Saturday, which raised $3.5 million in 2016.

“It’s getting bigger and bigger,” said Ripa. “The first time I came, there were no children. Over the past few years, I’ve noticed a lot of kids. Then, I’ve noticed lots of husbands. It’s really staggering to me. It used to be a real girl-fest and now it’s everything!”

Kelly’s gig as a talk show host makes her a natural choice for hosting charity events. SoulCycle tabbed her to handle the duty for its ride event, proceeds of which went toward Fashion Targets Breast Cancer.

“Kelly was my first choice as a cohost for this event. Kelly is not only an amazing rider but also always smiling and positive to be around,” jewelry designer Jennifer Fisher told Glamour in 2013.

Fisher partnered with the not-for-profit organization, Council of Fashion Designers of America (CFDA), to put on the event.

“She was my only choice,” added Fisher.

Fashion Targets Breast Cancer is a charitable initiative of CFDA.

In 2001, fresh after being named new co-host of Live!, Kelly joined Regis on a celebrity version of Who Wants to Be a Millionaire?.

Ripa won a total of $250,000 on the program, all of which went to Tomorrows Children’s Fund, an organization founded by parents to help children with cancer and serious blood disorders.

Kelly was motivated to work with Mothers Against Drunk Driving (MADD), when her sister, Linda, was almost killed by a drunk driver in 1999.

“Linda still walks with a limp — she will always walk with a limp,” Ripa told USA Today in 2001. “She has permanent nerve damage in her leg and in her foot.”

Ripa’s involvement began in 2001 when she served as national chairwoman for the organization’s annual Tie One on For Safety holiday ribbon campaign.

“I want to get the message across that it’s not OK, under any circumstance, to have a drink and get behind the wheel of a car — ever,” said Ripa.

“I am hoping to prevent a situation that alters the life of a family the way my family’s life was altered,” she added.

Ripa is passionate about equal rights for members of the LGBTQ community and that passion led to her co-hosting the Point Foundation’s Honors benefit in 2010.

“I always say I feel like the live morning show is just my living room and I’m just having coffee. Being at these important events where it matters what I’m saying – it’s to raise money, and you want to give people a good show but still get the message out there,” she told People.

According to its website, Point Foundation “empowers promising lesbian, gay, bisexual, transgender, and queer students to achieve their full academic and leadership potential – despite the obstacles often put before them – to make a significant impact on society.”

Naturally, Ripa recapped her night as co-host of the event with Regis on the ensuing episode of Live!.

Both Ripa and her husband Mark Consuelos are Catholic, and they have passed their faith on to their kids.

“We grew up Catholic,” she told Good Housekeeping in 2010. “We’ve both found it a stabilizing force, a source of strength and comfort in our lives. While we don’t always say grace at meals, we do say our prayers every night.”

It’s unclear how much involvement Ripa has in regards to giving back to her religion, but she did take the time to meet with Catholic Charities Brooklyn and Queens during a visit by the organization’s Office of Development to the Live! Studios. 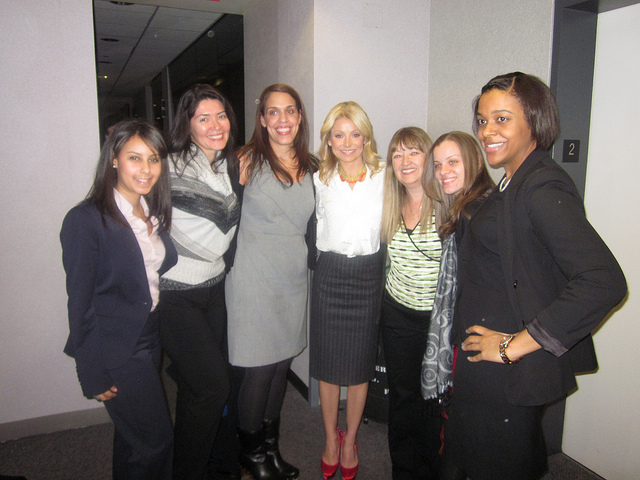 No matter if she’s on TV chatting with the biggest stars in Hollywood or hosting an intimate charity event, Kelly Ripa is someone who truly embodies what it means to be a “good celebrity.”

Stay linked to Good Celebrity for all the breaking celebrity news headlines and stories about people doing good!