Super Bowl WR Julian Edelman: A Comprehensive Guide to His Charitable Impact on the World

Win or lose, it’s how you play the game. Whether or not the New England Patriots take home a win in Super Bowl LI, Julian Edelman can walk off the field knowing that he’s making a difference by giving back.

Before he was drafted by the Patriots in 2009, he played quarterback at Kent State University. The successful NFL wide receiver has spent his entire career with the Pats and even caught the go-ahead touchdown to secure his team the Lombardi Trophy during Super Bowl XLIX.

Julian Edelman Gives Back to Children

Most recently, Edelman spent time with kids during the Holiday Season for some sweet story telling.

The WR authored a children’s book titled “Flying High,” and read it for the first time at a fundraising event to benefit Christmas in the City, a nonprofit that supports kids and families who are homeless or struggling with poverty. 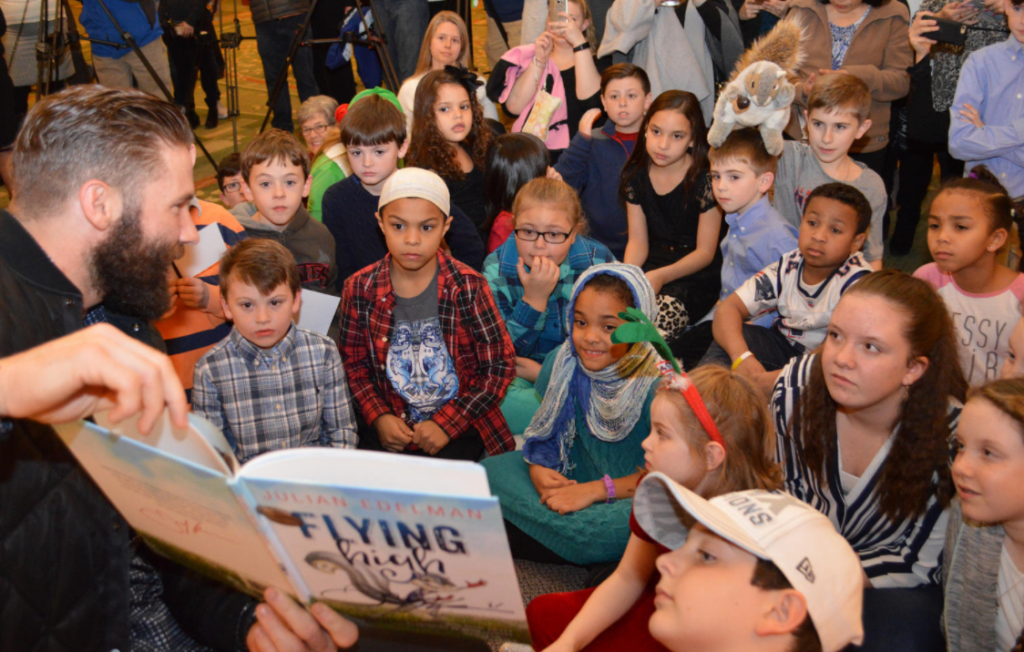 Another way the football star gives back to kids is by teaching them the ins and outs of his beloved sport.

In partnership with ProCamps, Edelman started an annual Football Clinic for kids interested in learning more about the sport. Since 2015, proceeds benefit the Ronald McDonald House of Eastern New England.

Per the Julian Edelman Football Clinic site, “Participants will learn fundamental football skills and have the opportunity to meet and interact with the star wide receiver. Each camper will receive an autograph from Julian and a team photo with Julian.”

Also, Edelman brought hope to children in need of a smile when he paid a visit to the Hasbro Children’s Hospital to kick off the Dunkin Donuts Fifth Annual Iced Coffee Day to benefit the facility.

The annual benefit has raised more than $650K for the children’s hospital.

Partnering with Fellow NFL Stars to Give Back

In 2013, Edelman teamed up with NFL pals including Chandler Jones and Danny Aiken as a celebrity bartender for an event benefitting the Greg Hill Foundation.

The organization responds to the immediate needs of families that had been touched by tragedy and is based in the Greater Boston Area.

In addition, Edelman joined teammates Danny Amendola and Rob Gronkowski to sport some aprons and serve guests for one night at Towne Stove and Spirits on Boylston Street for Boston’s Celebrity Waiter Night. All proceeds from the night benefitted charity.

Finally, Edelman partnered with teammate Matt Light for a panel and luncheon event that raised money for the “Light Foundation” and the Greater Boston Food Bank.

During the event, an ESPN reporter recalls Julian talking about his phone call from coach Bill Belichick on draft day, saying, “‘We don’t know what you’re going to play, but we know you can play football.’”

Edelman gives has a big place in his heart for the men and women that serve the United States. He’s a frequent giver to the military.

Last year, the wide receiver headed to Travis Air Force Base in California to host a youth football camp for roughly 200 military kids. The clinic was part of a series run by ProCamps, a group in which Edelman frequently collaborates.

After the event, Julian thanked the families in attendance and said,  “You guys are the real patriots.”

In addition, after a visit to the White House while President Barack Obama was in office, Edelman and some his teammates headed to the Walter Reed National Military Medical Center in Bethesda, MD to visit with veterans recovering from lost limbs and broken bones suffered while serving in Afghanistan and Iraq.

Edelman visited the military members in the hospital along with Coach Belichick along with Gronkowski, Devin McCourty, Chandler Jones, Jerod Mayo, and Matthew Slater.

And that’s a wrap for Julian Edelman’s charitable roundup. Make sure to check out teammate Tom Brady’s philanthropic efforts, which we’ve gathered for you right here.

Stay linked to Good Celebrity for all the latest celebrity news headlines.