To say Sir Elton John is a pop singer is a massive understatement.

Among the many accomplishments throughout his five-decade career are over fifty Top 40 songs, more than 300 million records sold, seven consecutive #1 albums in the U.S. and the best-selling single in the history of the U.K. and U.S. charts (Princess Diana tribute song, “Candle in the Wind 1997”)

But it’s off the stage and outside of the studio where the England-native truly shines. Through his charitable, Sir Elton has touched countless lives across the globe and is truly a celebrity doing good.

The entertainer has long been a champion of LGBT rights. In the 1980’s he became involved in the fight against the disease that has claimed so many of the people in the community, AIDS.

Started in the U.S. 1992 and U.K. a year later, the non-profit EJAF helps people stricken with the with HIV and AIDS (regardless of sexual orientation) through philanthropic work, education, and generous donations which have totaled more than $350 million since its inception.

“Seven thousand men, women, and children become HIV-infected every day.  We have both the moral obligation and the power to end this epidemic,” Sir Elton said in a letter on the organization’s website. 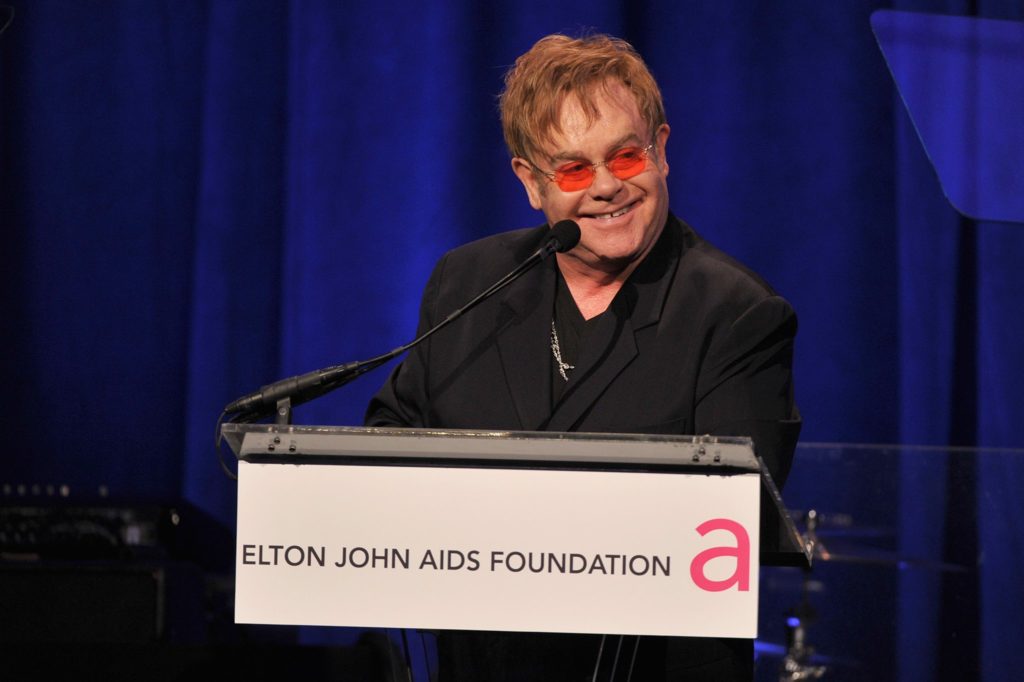 “This highly successful event brings the 24-year cumulative total of dollars raised by Smash Hits to more than $15 million for EJAF’s grant-making initiatives supporting HIV/AIDS-related advocacy, prevention, stigma reduction, and direct treatment, care, and service programs across the United States, the Americas, and the Caribbean,” Sir Elton said in a press release following the event.

In addition to his HIV and AIDS prevention work, Sir Elton has also supported organizations that fight for children stricken with cancer and against diseases such as multiple sclerosis and breast cancer.

Sir Elton is a staunch supporter of environmental issues and his beliefs are represented at the EJAF where employees are encouraged to recycle, minimize energy and water use, and participate in the Cycle to Work scheme, which is a U.K. government initiative that promotes cycling to work.

He has also participated in the Rock for the Rainforest concert, which benefits the Rainforest Foundation Fund, and had his singing services auctioned off for $3 million to assist the Leonardo Dicaprio Foundation in 2015.

He’s also a champion of endangered animal rights, teaming with Dicaprio and Nicole Kidman in the fight against the poaching of elephants.

An avid sports fan, Sir Elton teamed with U.K. charity SportsAid for a fundraising concert in 2014 to launch the Elton John Sports Fund.

“Thanks to your support, we will be able to fund young athletes for the next eight years to help make their dreams come true. Thank you!” Elton said to the crowd at Stoke Park Golf Club after raising £300,000.

Funds from the organization benefit aspiring Olympic and Paralympic athletes.

“It is important in sport as much as music that we give a platform to people who show promise – the impact of that recognition can be huge, it tells them the sacrifices are worth it,” he said in an interview with BBC in 2015.

Sir Elton also supports youth causes be it for LGBT through
The Trevor Project and American Foundation for Equal Rights, or for kids of all races, ethnicities, and creeds with the STOMP Out Bullying campaign.

While his career highlights earned him international stardom, it’s his good deeds that earned him the “Sir” in front of hi name.

In 1998, Queen Elizabeth II knighted Elton John for his charity work, making him the first openly gay musician to receive the honor.